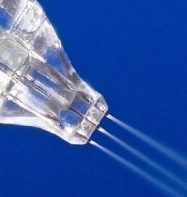 This revolutionary and natural skin rejuvenation technology has been used in our spa since 2007 with remarkable results and extremely high customer satisfaction. It is an all natural, virtually painless, skin treatment procedure that dramatically improves the appearance and texture of your skin in a rapid manner and provides a discernible enhancement to the recipient from the very first Jet Peel ™ treatment session.

To see how the Jet Peel works check this video:

What conditions does the Jet Peel ™ treat?

· Removal of blackheads and other come done eruptions

Jet Peel ™ treatments are also natural, quick, effortless, safe and without any pain or discomfort.

The Jet Peel ™ marketing video you can check here.

In the Oakville Beaver

How does the Jet Peel ™ work?

This unique procedure works simultaneously on five different levels at once. Each Jet Peel ™ treatment gently “pressure wash” your skin utilizing water, oxygen and other optional medical gases, delivered at supersonic speed. This gentle cleansing unclogs pores and removes any debris that has naturally built-up in the skin over the years. In addition, each treating session provides micro- circulation to the treated area. Your skin will appear more vibrant, smooth and youthful.

Where on the body can Jet Peel ™ treatments be used?

How many Jet Peel ™ treatments are needed?

How will I look and feel after a Jet Peel ™ treatment?

During the actual brief treatment session, your skin may well take on either a pink hue or become slightly lighter in color depending upon your skin type. However, within 15 to 30 minutes after the treatment is completed, your skin will typically return to its natural coloration so that you can immediately return to your normal activities without any discomfort.

What are the uses of the Jet Peel ™ system?

Although the Jet Peel ™ is most often used as a “stand-alone” device to correct a multitude of skin problems, many people report that their fastest and most satisfying resolution occurs when Jet Peel ™ treatments were combined with an IPL system in the very same treatment session. Since it is scientifically recognized that the fundamental basis of all cellular growth and repair requires both water and oxygen; the delivery deep within the skin of ample quantities of these essential elements by the Jet Peel ™ exclusive supersonic “infusion-style” technology, may well provide the underlying foundational support for more rapid skin improvement.

Is the Jet Peel ™ a safe treatment procedure?

All Jet Peel ™ treatments are safe for both the patient and the administering staff member. Since the Jet Peel does not use any form of light enhancement, it does not require a physician’s involvement, thus, any trained staff member can legally operate a Jet Peel ™ system. Because the Jet Peel ™is so safe, it has been designated as a medical device unlikely to cause any serious injury.

How does Jet Peel differ from crystal Microdermabrasion? 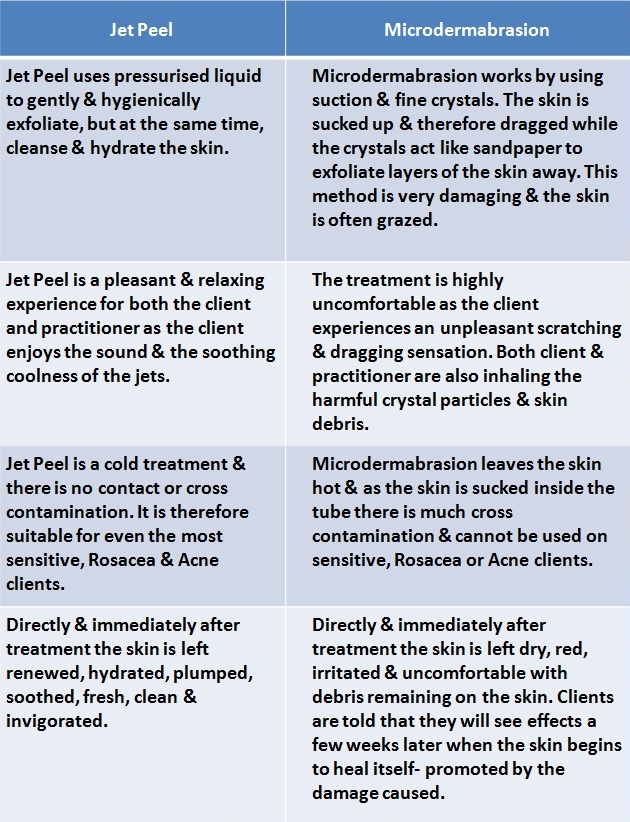 Article originally posted on the Truth in Aging Blog.

The Jet Peel treatment has piqued my curiosity since my dermatologist’s office (Gold Skin Care Center in Nashville, TN) began offering it in their Medi-Spa earlier this year. Recently, a special offer for the treatment was just too good to pass up, and since the summer heat has made my skin all the more oily, congested and pore clogged, this was a perfect time to give this a try.

While many different types of cosmetic peels have been available for years, their basic premise is to remove the top layer(s) of dead or damaged skin. Non-invasive, the Jet Peel is an all natural, virtually painless skin treatment procedure designed to improve the appearance and texture of your skin. Benefits from the procedure are: deep cleansing, exfoliation, hydration, oxygenates and micro-circulates the treated area. Jet Peel can help in treating clogged pores, acne and blackheads, scars, skin discoloration and multiple signs of aging. Also, there is no down time.

My esthetician began by evaluating my skin and asking about my skin concerns, and then demonstrated on my hand how it works. A hand held device that resembles a stylus sprays a high velocity jet stream of sterile saline solution and compressed oxygen on the skin. (The liquid/oxygen combination is the only thing that ever touches your skin.)

She cleansed my face and then gave it a quick once over with a Clarisonic brush. The treatment began in two stages. First, by going back and forth with the device, using sterile saline and working in small areas of the face. This is the exfoliation, cleansing, hydration and oxygenation portion. As the passes were made all I felt was a cool, light pressure sensation, which I actually found pleasantly relaxing. On problem areas such as clogged pores/blackheads, she made extra passes. The last step was my choice of an infusion of vitamin C, hyaluronic acid or a vitamin A and E combination which was applied in the same manner as the sterile saline. It only took about 45 minutes.

My end result was great –clogged pores and blackheads were gone, my skin plumped, glowing and now prepared to more readily absorb my favorite products. Although results are not equivalent to a deep chemical peel, this is a light peel that would be a good choice that could address several problems. One treatment may be enough for anyone just wanting to revitalize a dull complexion, while those experiencing acne breakouts or other concerns should ask about a series of treatments spaced about 4-6 weeks apart to attain their goal. Not only for the face, this treatment can also improve the appearance of the hands, chest, and other areas of the body.

Prices for the Jet Peel vary widely across the country when checked on the web (and I also noticed it is even offered in the UK and Dubai), so you would want to check your local area, however I paid $70 for the entire treatment. (The usual price is $100 for the peel alone or $150 if you add the vitamin infusion). This treatment is for guys or gals, and I would recommend it as a great way to help rejuvenate your skin.

This article in the PDF Format with case pictures.

The Jet Peel system is a revolutionary device designed to treat a variety of skin conditions. The system uses a specially designed handpiece to create a supersonic two-phase
jet consisting of microdroplets of saline solution and gas, either air or oxygen. The supersonic stream accelerates the droplets’ velocity to up to 200m/sec. When the very small, fast-moving droplets from the jet stream strike the skin, the kinetic energy of the droplets peel off the outer layers of the skin. When the discharged gas meets the skin surface, its pressure is partially restored, and this pressure increases as it approaches the skin. The pressure, which can reach 2-3 bars, stretches the skin at and near the point of contact. “Barophoresis” occurs due to the difference in pressure on both sides of the skin. The intensive heat exchange during treatment causes skin temperature to drop by 5-8 degrees Celsius. This in turn stimulates the body’s thermoregulation system and increases blood circulation.

JetPeel can be used on any skin surface of the body and face, the pilose part of the head, and on the hands and feet. JetPeel’s ability to immediately improve skin turgor, circulation and humidity creates the best conditions for further healing, refines the skin structure and helps avoid most complications. Post-operative JetPeel use accelerates skin reconstruction through deep and intensive moisturizing and cleansing, and by stimulating the recovery process.

To see video and more information visit this website.